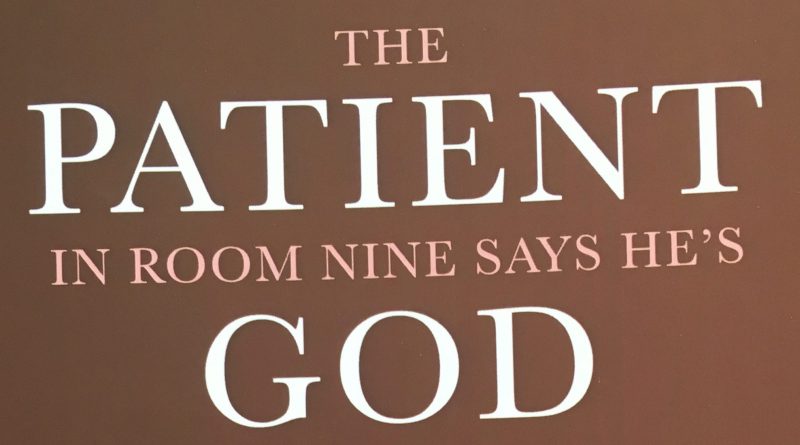 So, knowing it was a medical book I assumed from the title that this was a psychiatrist writing about a “nutter” that he’d diagnosed and how tedious it all was for the doctor.  But Louis Profeta’s intention is quite different as the patient in room nine turns out to represent God, in at least one sense, he is the person whom we should help.  This patient turns out to be in a very bad place but one where Profeta can help: indeed Profeta uses every chapter of the book to speak of the spiritual side of medical help.  Jewish and sensitive, Louis Profeta constantly sees the way fate can intervene, how the wisest words often come from patients, and how belief in a higher power can improve a doctor’s perspective and treatment.

Even the front cover is carefully thought out with the words “Patient God” being highlighted in the title, and the chapters are divided into distinct episodes so that you can easily read one each night – if you use a book for bedtime reading – though the stories are gripping enough that you may well get through two or three most evenings.  Many of the events that happen are from the ER, the Emergency Room, or when the team are called out to an accident or health crisis – Professor Profeta specialises in responding to emergency calls.

“We all need to feel that we are part of something bigger, an extended family.”  The most memorable story for me was one where the author got caught in a terrorist incident in a supermarket and he helps rescue a very young girl from the wreckage though her bad injuries mean that she loses an eye and an arm.  Many years later he discovers that when she grew up she trained as a physiotherapist and works at the same hospital where he works, and they are reunited.  So this patient enters the world of FOPs (Friends of Profeta) and he goes on to discuss the tricky issue of how a doctor should deal with friends who are asking for favours – how to help them without disadvantaging those who did not previously know the specialist.  “Well”, he concludes, “I tend to treat everyone the same.”

Louis Profeta also puts forward some paradoxical observations based on a lifetime’s work at the front line: for example, “The rich get the worst medical care”.  This is because having been in position where they boss people around and expect to be obeyed even when they are wrong, the attitudes of the rich and powerful can often get in the way of their doctors, in contrast to more humble patients.  Another paradox is the patient who endlessly shops around in hope of better treatment – rather than getting better treatment they are usually in denial about their problem and possibly don’t have a physical problem but very likely a psychiatric one..

Profeta makes clear that he’s got no patience for relatives who keep their relatives alive simply for the sake of it:  “you will probably have a fast track to hell if you sign the papers to put a feeding tube in your 80 year old mother with Alzheimer’s or severe dementia because she is no longer eating …. boomers have placed (elderly relatives) on dialysis, put plastic tubes into lungs, catheters into their groins and bladders, wrapped them in diapers and called it “love”, then scurried off to tennis lessons and personal trainers.”

The crisis in emergency medicine