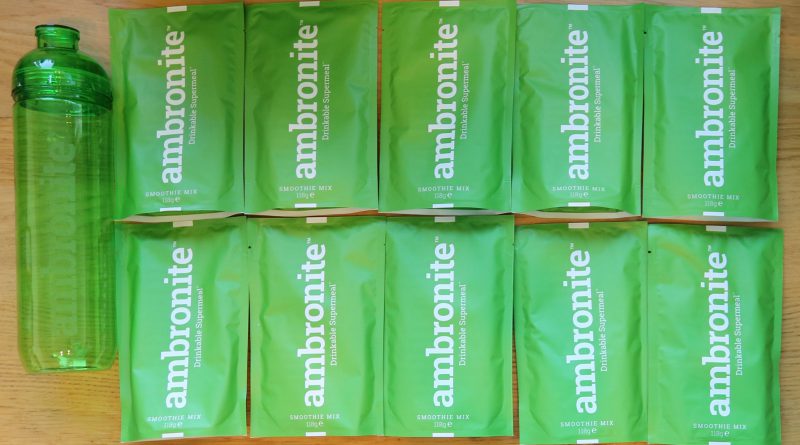 We’ve all been in that situation where there just isn’t time to cook dinner or we’re too busy to sit down and enjoy a meal. Well Ambronite might just be that solution.  Over the last few days I have been trialling this green vegan supermeal smoothie liquid diet.  As a foodie, it has not been easy moving away from traditional meals, but I have to say that Ambronite has boosted my productivity by keeping me going all day.

At first I was skeptical – how can a liquid diet keep you full?? But it does! Working for exams I even lost my cravings for snacks which kept me on track with revision (and hopefully good results).

I initially used Ambronite’s specified method of making the shake by adding the powder to the water and shaking thoroughly but soon moved to using a blender to remove lumps as these can make the drink taste unusual. Taste… It’s certainly not what I expected when I read smoothie – but from a powdered product you can really taste all the ingredients. If I had to describe it I would say Goji berries and oats combined.  Although for the first couple of shakes the taste was strange I soon became used to it and would guzzle down the shake every 4 hours to boost me through my work. The lack of choice with flavours is quite nice as I’m quite indecisive and the given flavour wasn’t unpleasant or artificial.

The box came quickly and is Apple-esque in presentation. Packed into the box I received were 10x 500 kcal sachets and a large green plastic shaker as well as a booklet with all the ingredients and information detailed within.  Everything is green – the box, the shaker, the sachets – even the smoothie! The 500 kcal sachets also allow you to keep track of how many calories you’ve consumed and allow you to adjust the number of meals depending on how active you have been. I stuck to 4 meals-a-day as I was just sat down working when trialling Ambronite, however when active and burning more energy extra meals can be added accordingly.

Elon Musk famously said “If there was a way that I couldn’t eat so I could work more, I would not eat. I wish there was a way to get nutrients without sitting down for a meal”. Ambronite doesn’t remove the need for food entirely but certainly simplifies and speeds up meals and allows you to fuel up without leaving your desk.

Not only is Ambronite quicker and easier than what you’d normally have but it’s also probably healthier than what you’d normally prepare.  It’s designed to be a completely balanced nutritional product but unlike other meal replacements it’s made solely out of natural ingredients and is vegan. This is what makes Ambronite stand out from other meal replacement powders – It’s not simply a mix of the chemical constitutents of food but is far more natural. Ambronite’s not just a supplement, it’s a supermeal!

In my trial of Ambronite I drank it for 3 days for every meal and I have to say it was great for ease of use but by the end of the trial I was craving chewing and eating something solid – in my opinion as someone who loves eating Ambronite is a fantastic convenient alternative rather than a permanent substitute.  When I’m working on a project or doing revision, meal times tend to disturb my flow, but having a shake on my desk just lets me keep going as long as I need. It’s also great when you’re just too tired to cook or you want breakfast on the move as it is so speedy.

Overall I think Ambronite is a great product and I’m especially keen on the use of exclusively natural products in this supermeal. The only real downside to this product is the price but for the target market of busy professionals who want to boost their productivity it’s great. If I as a student could afford to drink this every day to keep me in the library longer my productivity would certainly go up – for the 3 days I trialled it I got more work done than I would normally in 5! I’m very excited to try out the latest Ambronite supermeal and breakfast shakes, and I’m pleased to hear as an eco-warrior that these are going to be sold in bigger bags with scoops, which will reduce packaging and also is being sold as a far more cost effective package.

What are the dangers of ‘safe drugs’ such as caffeine?

Nutrigenomics  – can your DNA tell you what to eat?